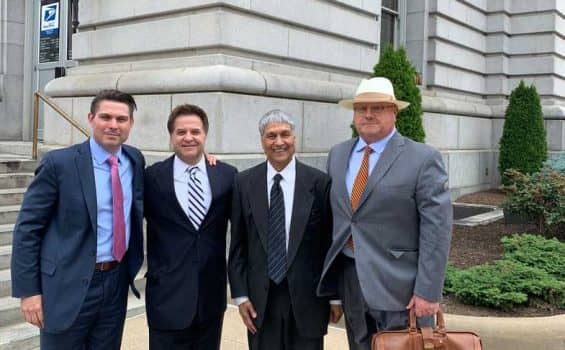 Chapman Law Group was retained by the owner of a West Virginia-based pain management/addiction medicine practice, who was accused of drug trafficking and healthcare/Medicare fraud, wire fraud, and mail fraud.

The physician prescribed suboxone/buprenorphine as part of a medication-assisted treatment program and also provided pain management treatment including interventional procedures. The physician was alleged to have unlawfully prescribed to patients, pre-signed prescriptions, permitted staff to issue prescriptions for controlled substances, and committed Medicare fraud and Medicaid fraud.

Essentially, federal prosecutors alleged that the practice was a “pill mill” and committed health care fraud.

After being retained by the client, we began investigating the “pill mill” and health care fraud allegations. We eventually engaged in negotiations with the government after providing the prosecutor’s information about the error of its unlawful prescribing (pill mill) allegations.

The government agreed to remove the unlawful prescribing allegations from the indictment but declined to resolve the remaining 32 health care fraud charges. After the government made the decision to indict, we aggressively fought the charges and filed two separate motions to dismiss.

The first motion was filed because the government improperly reviewed our client’s privileged attorney-client email messages. While the motion was ultimately denied, it was clear that it raised a significant appellate issue. The second motion to dismiss was filed after the government disclosed that it failed to review 100,000 files, which were not disclosed until a week prior to trial.

The government’s theory of the health care fraud case was that the physician billed for patient visits using the codes 99214 and 99215 without seeing the patients. We obtained two experts who were prepared to testify that the “incident to” rules for Medicare and West Virginia Medicaid rules permit billing for services of support staff, including nurses.

In essence, this was not healthcare fraud and was permitted by regulations. Also, we obtained an expert pain management and suboxone prescriber who was prepared to testify that the method in which this physician ran the suboxone program was completely permissible.

Just prior to trial, the government agreed to dismiss the health care fraud charges.

Each lawyer in our national healthcare defense practice at Chapman Law Group is uniquely suited to defend Medicare fraud claims, as well as Qui Tam and whistleblower actions. Our knowledge of conditions of payment, conditions of participation, and 35 years of defending physicians accused of malpractice, give us the knowledge to understand and apply the standard of care, DRG’s, CPT’s, clinical practice guidelines and conditions of payment in the defense of our clients.

The health care fraud defense lawyers at Chapman Law Group will aggressively defend your health care matter from internal investigation through trial. We handle multistate federal criminal matters investigated by the Department of Justice; state felony matters; and, where criminal sanctions are possible, investigations commenced by the HHS, FBI, DEA, FDA and DOJ.

We have extensive experience in defending health professionals across the U.S. who are faced with criminal charges, from false claims, kickbacks, fee-splitting, patient brokering, and Stark Law violations, to DEA matters, drug diversion, and Qui Tam/whistleblower actions.

Our national health care defense offices are in Detroit, Michigan; Miami and Sarasota, Florida; and Los Angeles/Southern California. Contact us today for a consultation.

A Medicare plan administrator sought $250,000 from an ophthalmology practice after reimbursing incorrectly, but the arbitrator rejected the argument, calling its fee schedule “incomprehensible.”

Case Result: Physician Gets DEA Registration Back After Investigation Into Role in ‘Pill Mill’ Operation

Our attorneys a memorandum of agreement, which will allow the physician to obtain a DEA registration, impose few requirements, allow him to continue prescribing and practicing medicine, and obtain employment.