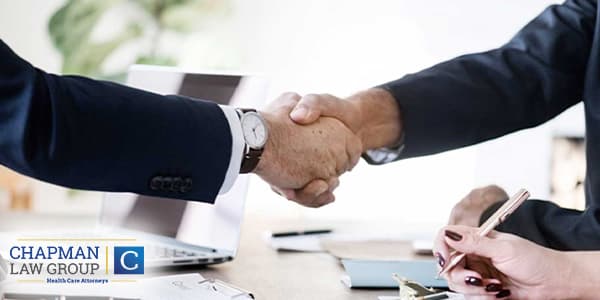 And the penalties are stiff.

Tens of thousands of dollars in fines. Jail time. Plus, you could be found in violation of other federal offenses.

Physicians or other medical providers are not allowed to induce or coax referrals for medical services that are paid by federal health programs. This prohibition covers Medicare and Medicaid patients, as well as any other health program paid for by federal funds.

Because the federal government is increasing and enhancing its investigation and prosecution of Medicare and Medicaid fraud, it’s important to take a closer look at whether your practice is staying compliant — and not engaging in kickbacks. Our national healthcare fraud and criminal defense attorneys explain how to do it.

The Court’s Test for Determining Kickbacks in Health Care

According to federal law, a kickback is any remuneration, in cash or in kind, directly or indirectly, overtly or covertly, that is paid in return for patient referrals.

In determining whether a payment to a physician or other medical provider is a kickback, the courts use the “One Purpose Test.” Under this test, if “one purpose” is to encourage patient referrals, then it is a kickback.

Even if the physician was being compensated for some service rendered, if one purpose of the payment is to induce referrals, that is considered a kickback.

This can be true for payments made for medical directors or interpreting physicians. If the physician is in position to refer business to the medical provider making the payment, the payment and the relationship may be suspect.

As the courts use this broad interpretation of the definition of kickbacks in health care, the risk of a violation increases.

A kickback can be in many forms. For example, cash in any form including free rent, vacations, meals, and payments for services not actually performed. In certain cases, payments made above market value for services rendered or services that were not necessary have been the basis for prosecution.

Penalties for a violation of the Anti-Kickback Statute (AKS) are severe and costly.

According to Office of Inspector General (OIG), violations can carry criminal and administrative sanctions. These include fines, jail terms, and exclusion from Medicare, Medicaid and other federal health programs.

Each violation can carry a fine of up to $50,000, in addition to three times the amount of the kickback.

In addition to monetary sanctions, violators may also be sentenced for up to five years in jail.

Further, a violation of the AKS also can serve as a basis for a False Claim Act violation. This is a great expansion of the False Claim Act, and it has served to strengthen the federal government’s enforcement of Medicare and Medicaid Fraud prevention laws.

According to the Office of Inspector General’s publication “A Roadmap for New Physicians,” a medical provider may not systematically waive a Medicare or Medicaid beneficiary’s co-pay in order to encourage the patient to utilize the provider’s office or facility. It is possible to make concessions for individual patients that can show financial hardship, but this investigation must be documented for the individual.

Are You in Compliance? Let the National Healthcare Lawyers at Chapman Law Group Keep Your Practice Where It Needs to Be

With 35 years of experience in health care law, Chapman Law Group guides and advises medical providers across the U.S. through the vast landscape of federal regulations.

For more than three decades, we have provided top legal service for licensed healthcare professionals throughout the U.S. Our extensive experience in key areas of regulatory compliance in healthcare include:

Our attorneys can review potential service agreements and advise medical providers as to their legality, and we will set you on the right course so that you are in compliance.

Our offices are in Detroit (where we serve Dearborn, Troy, Ann Arbor and Grand Rapids, and the rest of Michigan); Miami and Sarasota, Florida (for Jacksonville, Tampa, Orlando, West Palm Beach, and all of Florida); Los Angeles/Southern California; and Chicago. Contact us today.

Here is a hypothetical. A cardiologist with a large practice wishes to invest in a joint venture that the hospital is starting with a local

Here is a familiar situation. A health care provider — such as a pharmacy, lab, DME or hospital — hires an “employee” to work as