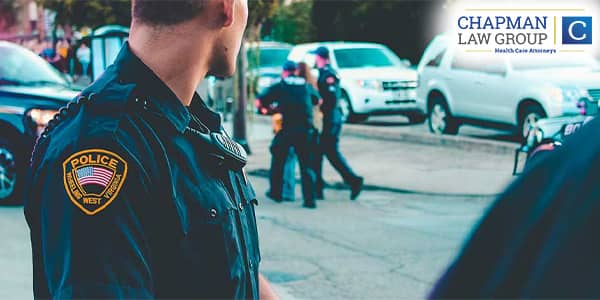 At Chapman Law Group, We Understand the Complexity of Correctional Healthcare and Police Liability Defense

Police officers and other law enforcement personnel are liable in a surprising area of lawsuits. Under state law they may be sued for assault and battery, false arrest, gross negligence, and police dog bites. Other areas arise under Federal law involving deliberate indifference, use of force and training issues.

A battery is the willful and harmful or offensive touching of another person that results from an act intended to cause such a contact. An assault is essentially an attempted battery. These are considered intentional actions found not to be within the exercise or discharge of a governmental function.

When police officers engage in acts that normally might constitute intentional torts, they are protected by governmental immunity if those actions are justified. When they are not justified, they are not protected.

In order to prevail on a claim of false arrest or false imprisonment, the plaintiff must show that the arrest was not legal. If there is probable cause for the arrest, the plaintiff cannot state a claim. Usually a false arrest is considered an illegal and unjustified arrest without probable cause, and false imprisonment involves an unlawful restraint on a person’s liberty or freedom of movement.

The elements of false imprisonment are an act committed with the intention of confining another, the act directly or indirectly results in such confinement, and the person confined is conscious of his confinement.

Generally, to avoid the defense of governmental immunity, a plaintiff will plead a claim of gross negligence. Michigan law under MCL § 691.1407(7)(a) defines “gross negligence” as “conduct so reckless as to demonstrate a substantial lack of concern for whether an injury results.” This area of law is highly specialized.

Police also have been sued in Michigan for liability under common law and statutes for the dog-bite injuries. However, Michigan Courts have ruled there is governmental immunity for police dog bites.

Officers may also be sued under Federal law, under 42 U.S.C. § 1983 for rights deprivation, a major area of liability for any police department or other public employee. Essentially, the public employee must use the power of the state, by virtue of their employment and authority, to violate someone’s rights. Police officers, of course, are usually liable for issues that arise during the arrest and detainment of the public.

This includes injuries while subduing arrestees, when the courts address whether the arresting officer’s actions were proper in attempting to subdue the arrestee, recognizing a distinction between the amount of force that is reasonable before a subject is subdued and the amount of force, if any, that is reasonable after a subject is under police control.

Further, a private person jointly engaged with state officials in a deprivation of rights action is acting under color of law for purposes of § 1983. For example, a physician who is under contract with the state to provide medical services to inmates at a state prison hospital on a part-time basis acts “under color of state law,” within the meaning of 42 U.S.C. § 1983, when he treats an inmate.

Let’s say an inmate at a state correctional facility was transferred to the state prison hospital for an orthopedic consultation. The state hospital contracted with private physicians to provide medical care at the prison’s medical facility. The defendant physician treated the inmate at the prison hospital and was paid under the state contract. The Courts explain that it is the physician’s function within the state system, not the precise terms of his employment, that determines whether his actions can fairly be attributed to the state.

Contracting out prison medical care does not relieve the state of its constitutional duty to provide adequate medical treatment to those in its custody, and it does not deprive the state’s prisoners of the means to vindicate their Eighth Amendment rights. The state bore an affirmative obligation to provide adequate medical care, and delegating that function means the contracted physician voluntarily assumes that obligation by contract.

Supervisory liability does not exist simply by being in the position of a supervisor. The plaintiff must show that the supervising police officer encouraged the specific incident of misconduct or in some other way directly participated. Therefore, the supervisor must have actively engaged in unconstitutional behavior.

A police supervisor’s liability must lie upon more than a mere right to control employees and cannot rely on simple negligence. There must be a showing that the supervisors somehow encouraged or condoned the actions of their inferiors.

The reasonableness of a particular use of force must be judged from the perspective of a reasonable officer on the scene, rather than with hindsight. The Courts look at what is reasonable at the moment the use of force occurred. Not every push or shove — even if it may later seem unnecessary in the peace of a judge’s chambers — is found to violate the Constitution.

The inadequacy of police training may serve as the basis for § 1983 liability only where the failure to train amounts to deliberate indifference to the rights of persons with whom the police come into contact. Only where a municipality’s failure to train its employees in a relevant respect evidences a deliberate indifference to the rights of its inhabitants can such a shortcoming be properly thought of as a city policy or custom that is actionable under § 1983.

Defending police liability, correctional care, and similar claims means having a deep knowledge and understanding of the duties of law enforcement and the legal system, in addition to a sense of confidentiality and fairness.

Preparations for Depositions in a Deliberate Indifference Suit

As a healthcare professional, you will either be a party to the litigation or one of the treating professionals, and you will need preparation for the deposition.

Administrative Remedies Provision of 42 U.S.C §1997e Does Not Apply If Inmate Not Incarcerated at Time of Filing of Complaint

As a result of the Prison Litigation Reform Act, exhaustion is no longer left to the discretion of the district court, but is mandatory, and inmates must now exhaust all “available” remedies, not just those which meet federal standards.

Many Variables are Involved in a Deliberate Indifference Claim Under 42 U.S.C. § 1983 per the 6th U.S. Circuit Court of Appeals, there are several

Do Indigent Persons Have to Pay for Medical Records in Michigan?